AmCham Romania Has a New Board of Directors 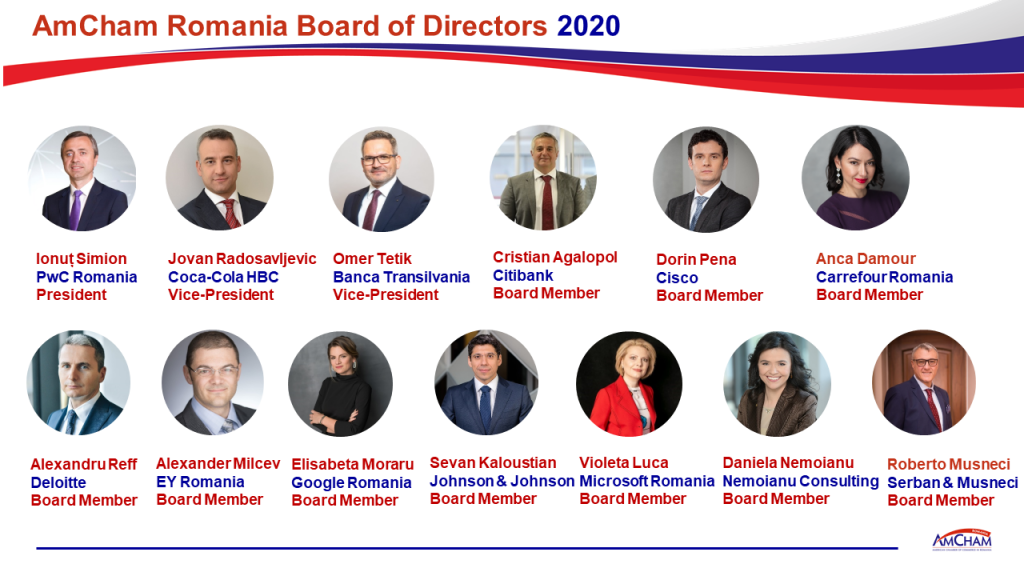 Following the March 31, 2020 Annual General Meeting and elections, new members were elected to join the AmCham Romania Board of Directors, therefore during 2020 this AmCham Romania representation and leadership structure will include:

Concerning the AmCham priorities for this year, Ionuț Simion, President of the AmCham Romania Board of Directors stated: “Given the rapid and unpredictable spread of the impact of this public health crisis on the society and on the economy, the private sector needs to actively engage in a twofold mission– to limit the immediate negative effects and to identify post-crisis measures to restart the economic activity.  We will continue to advance proposals, analysis and recommendations that reflect the views of AmCham members, in line with our mission to represent the business community. Although the Government announced that it will suspend transparency in decision-making and public consultations during the emergency state, we strongly believe that the private sector needs to be consulted as it plays a vital role for the economy.”

AmCham Romania reiterates the importance of a consistent and constructive public-private dialogue, focused on adopting efficient and modern public policies that will contribute to overcoming the current crisis and also to recover the gaps that Romania has in critical areas such as healthcare, education, infrastructure, digitalization of public services, gaps that are even more evident in the current context.

AmCham Romania Presents the Results of the 2020 Business Barometer Survey

THE AMCHAM HOUR with Board Member Alex Milcev: Fiscal Perspectives for 2020

AmCham Romania: Maintaining Romania in the Category of Countries Recommended for Investments Must be a Priority of the Economic Policy

AmCham Romania: Today, not tomorrow, we must invest in a modern and resilient education system, adapted to European standards and centered on the learning needs of the new generations

AmCham Romania: Education can and must continue by using technology