CTP: total investment of over 150 million euros for CTPark Bucharest West by the first quarter of 2018

CTP, the leading premium industrial parks developer and long term manager in Romania and Central and Eastern Europe, continues to strengthen its status on the domestic market through a series of important investments in the development of CTPark Bucharest West, which is designed to become the largest logistics park in Eastern Europe, with the fastest growth rhythm in Romania. The total investment in the CTPark Bucharest West will exceed 150 million euros by the first quarter of the next year.

The company currently has 100,000 m² under construction in CTPark Bucharest West, and significant plans to continue this expansion. In order to achieve this, CTP acquired land in the area so that it could reach a built area of more than 700,000 m² by 2020, a figure that would make CTPark Bucharest West the largest industrial park in Eastern Europe. In cooperation with local authorities, CTP aims to heavily invest in improving the infrastructure surrounding the park, located at 23 km West of Bucharest, as well as creating additional access roads and several highway exits to facilitate the transportation of goods for its tenants.

CTPark Bucharest West is also the only industrial park near Bucharest where tenants do not pay property taxes. Future investment plans include a range of customer facilities such as catering services, restaurants within the park, buses that will provide direct transportation between the park and the city, as well as hotel-type buildings to accommodate the employees of tenant companies. 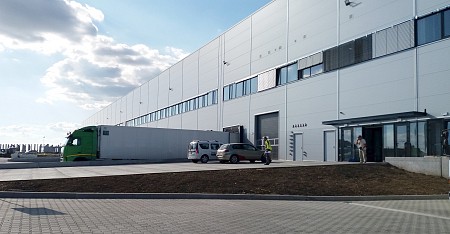 “CTP has major targets for both Bucharest and the rest of the country. We are in a continuous expansion process and we want CTPark Bucharest West to become the most important logistics park in the region, in terms of built area, the development rhythm and the quality standards. This last aspect is extremely important to us, which is why we make significant investments to ensure our customers do benefit of services above market standards. We currently have 30 tenants in CTPark Bucharest West, a number we wish to increase. We are committed to providing premium services and helping our customers grow their business. I strongly believe that a long-term owner, such as CTP, who is constantly expanding its logistics spaces, who does not compromise on quality of the buildings and who manages its properties with the utmost responsibility, will attract valuable customers and will build long lasting business relationships with them”, said Ana Dumitrache, Country Head of CTP Romania.

CTP acquired CTPark Bucharest West in 2015, when the park had about 130,000 m² of built area (Bucharest West I and Bucharest West II). Meanwhile, another 100,000 m² has been developed for customers such as: DSV, Quehenberger, Geodis, Cargo Partner, Gefco. Following the current expansion process, around 3,000 people will work in the park, and the various industries to which tenants belong will allow the creation of very useful links between complementary sectors of activity.

As the long-term owner of the buildings, CTP has implemented significant energy and resource saving measures across its portfolio. All warehouse building materials are purchased from ISO certified vendors. The logistics parks developed by the company benefit of generous green spaces around buildings to ensure the preservation of natural ecosystems. Low emissions and the extremely low use of harmful refrigerants place the CTP warehouses very high in the top of “green” industrial spaces.

CTP is a full-service commercial real estate developer and manager, specializing in the delivery and management of custom-built, high-tech business parks for leading international and domestic companies making strategic investments in new or expanded operations in Central Europe. CTP is the owner of the CTPark Network, the largest integrated system of premium business parks in Central and Eastern Europe, with over 4.1 million m² of A-Class properties in more than 60 strategic locations.

In Romania, CTP is the leading warehouse developer and manager, with a GLA of 650,000 m² of Class A warehouses spread in 10 cities: Arad, Bucuresti, Cluj-Napoca, Deva, Pitești, Sibiu, Timișoara, Turda, Ineu and Salonta.

Deloitte Romania: DRUID is the technology company with the fastest natural growth in Central Europe over the last three years, according to Deloitte 2021 CE Technology Fast 50 ranking; FintechOS is also among the fastest growing start-ups in the region