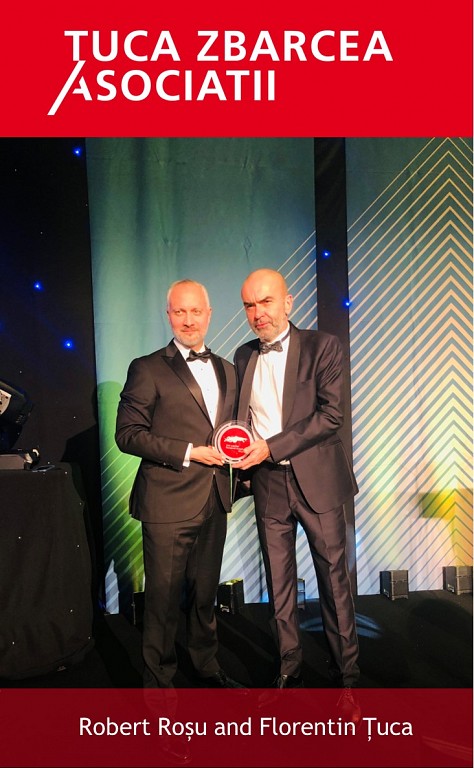 Ţuca Zbârcea & Asociaţii was named as the Law Firm of the Year: South Eastern Europe at The Lawyer European Awards last night. This is the fifth prize that the British publication The Lawyer hands out to the Romanian independent law firm.

With more than 250 sector leaders attending the festive evening, The Lawyer European Awards are recognised as the benchmark of excellence in the European legal sector. During the night, 25 trophies were awarded to law firms with remarkable performances during the past year, as well as to the leaders who, through strategic decisions and a visionary management, have achieved a significant contribution towards the expansion and overall development of their business, in the previous 12 months.

Winning law firms and individuals were selected by a judging panel made up of 63 lawyers and in-house counsels.

The Law Firm of the Year: South Eastern Europe Award category attracted nominations from seven leading independent and international outfits, with Ţuca Zbârcea & Asociaţii taking home the coveted prize. According to the judges, they were impressed by the firm’s outstanding work and client service, as well as the team’s involvement in volunteering and pro bono actions.

The prize was handed out to Managing Partner Florentin Țuca and Partner Robert Roșu.

“We are proud to have won this award, one of the most coveted trophies of the night. The Law Firm of the Year: South Eastern Europe Award places us alongside the strongest law firms in the region and is a recognition of the professionalism of our entire team and the outstanding performance achieved in a period marked by numerous uncertainties and turmoil. I thank the prestigious publication The Lawyer for this distinction, I express my gratitude to our partners and clients for the excellent cooperation during this period, and send a warm "hats off!" to all my teammates to whom I dedicate this trophy”, said Florentin Țuca.

It is for the first time when a Romanian independent law firm receives five awards from The Lawyer. After having been named as “Law Firm of the Year in Eastern Europe & the Balkans” in Berlin (2010), Ţuca Zbârcea & Asociaţii’s Managing Partner, Florentin Ţuca became the first Romanian lawyer to win the “European Managing Partner of the Year” award in Monte Carlo (2012). In 2014, the judging panel handed out Ţuca Zbârcea & Asociaţii the “Law Firm of the Year: Romania” award which the firm won again, for the second time, in 2016. And, in 2022, the firm co-managed by Florentin Ţuca and Gabriel Zbârcea wins the highest distinction in the region and Ţuca Zbârcea & Asociaţii becomes one of the most awarded law firms in Southeast Europe.

For a full list of The Lawyer European Awards 2022 nominees and award winners, please go to -  https://www.thelawyer.com/event/european-awards/

Impetum Group: Only 67 impact companies became insolvent in 2022, although at national level there are over 13,000 such companies in various stages of distress