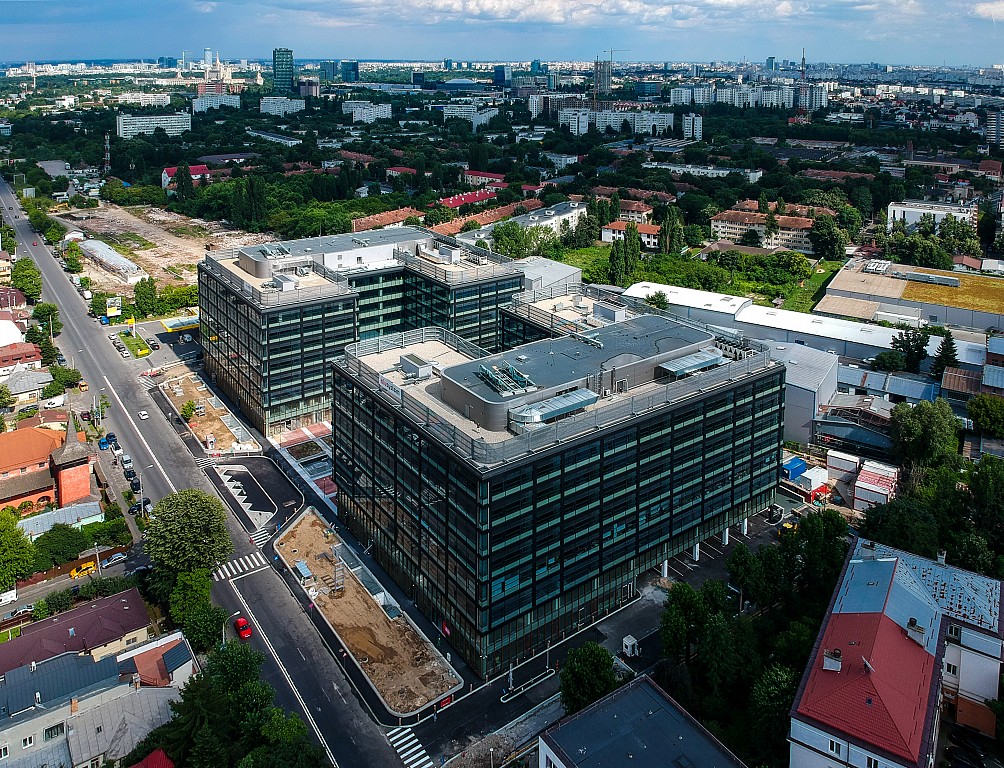 Portland Trust will complete its latest office project, J8 Office Park, at Jiului, Bucuresti Noi in July. Approximately 55% of the 44,000m2 building was preleased to Ubisoft, developer of well known computer games such as Assasin’s Creed, as their regional HQ.

In addition to Ubisoft most the 2nd floor of Building A has been leased to EUROINS Romania S.A. comprising approximately 2,500m2 which is seen as a sign of renewed tenant interest in healthy, new and ESG compliant buildings.

Much of the ground floor has also been leased to an exciting mix of tenants. These include a 500m2 new concept Mega Image supermarket and other F&B offers including Coffee Island cafe, a 600m2 Stradale restaurant and Pain Plaisir patisserie.

Kitchen showroom Bismobil will take 290m2 next to Mobile Vet which will offer veterinary services in addition to the shop of 140m2. There will be an Xpress unit accessible from the main reception.

There are extensive health and fitness facilities including a World Class gym of 1,400m2 and a kineto studio of 330m2 operated by Medy Sportline. Medicover have leased 235m2 and will provide medical services.

There is a 200 space card operated bike store and changing facilities accessible from the piazza which is beautifully designed with outdoor seating around a series of planters and another stunning piece of art by British sculptor Colin Spoforth which will be unveiled in late September. It is hoped that J8 will become a frequented commercial hub for the locality.

Robert Neale, managing director of Portland Trust said “ Both Portland and Ares have always had a mantra of producing efficient buildings and adopting sensible new technologies to reduce the amount of fossil fuel used in our buildings. J8 has hit a new level in ESG with increased air volumes, incredible air  quality and cleanliness to almost medical standard. We were able to redesign the MEP specification in Spring 2020 so that now we can comply with the highest and demanding corporate requirements. Some multinationals will need to relocate due to a low quality office environment and J8 will be available now companies are getting back to work”.

Recent projects include Oregon Park, EXPO Business Park and J8 which is Portland’s 8th major office development. J8 will also be certified BREEAM Outstanding and will offer the highest in class specification of clean air from HEPA 14 filters and U-VC air disinfection.

Portland Trust is a commercial property developer and investor active in Central and South Eastern Europe for over 20 years. J8 Office Park (www.j8officepark.ro) is developed in partnership with ARES Management Corporation, a global alternative asset manager and SEC registered investment adviser with approximately $145 billion of committed capital under management and more than 900 employees. Together Portland and ARES Management Corporation have developed over 800,000 sqm including 7 office buildings and parks in Bucharest and have won many awards for design and sustainability.