COVID-19 and the employee experience: real-time communication, fostering compassionate leadership and the restructuring of the employee organizational chart 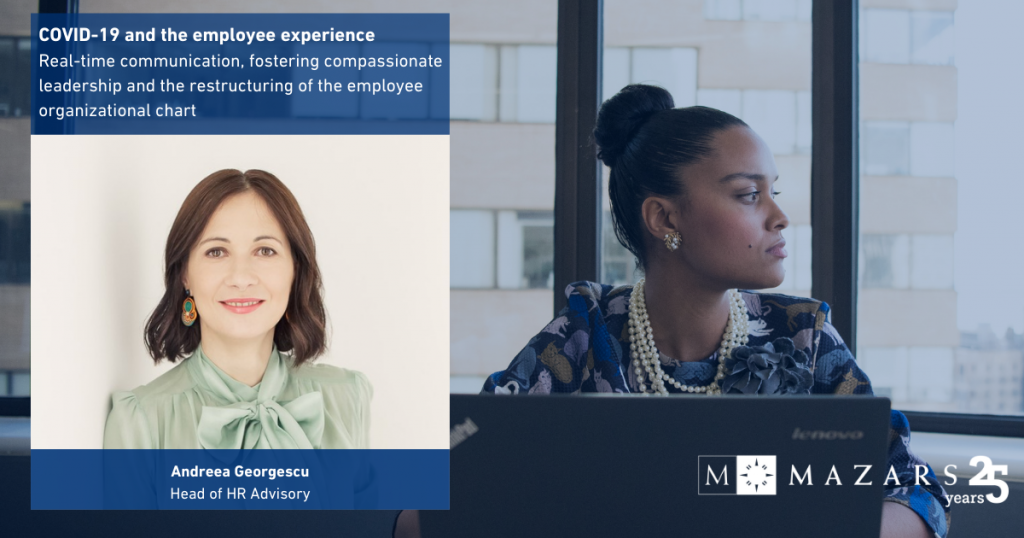 As we move through this global health and economic crisis, companies are coping with their respective challenges, mostly focusing on re-designing their business strategy, a task that proves to be very difficult under these extraordinary conditions. Several companies have created dedicated task force teams to develop strong action plans that support the new reality, which are guided by numbers and statistics, and which are missing the very important aspect that kept the company alive during the toughest times: the people.

Mazars recently launched a study to evaluate the support that employees have received during this pandemic, mainly dedicated to the private sector employees. 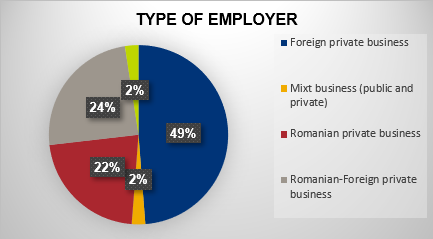 The ones who were the most eager to express their opinion were the experienced staff, who critically evaluated each dimension of the collaboration with the employer. This study becomes relevant especially because it highlights the management practices used at the beginning of the state of emergency. The respondents are representative of all hierarchical levels in a company: from individual collaborators (37.8%), to the first level of management (20.7%), intermediate manager (31.7%), and up to higher management (9.8%). From a gender perspective, the scale is quite balanced between women and men (52.4% and 46.3%).

76.8% of the companies that participated in the Mazars study continued their activity remotely

When talking about the possibility of Romanian companies to briefly implement teleworking arrangements on short notice, we observe that very few have, in fact, a Business Continuity Plan, even in crisis situations, which is an unsettling aspect. In Romania, only 1.2% of companies operate strictly virtually ever since their establishment.

On the other hand, 76.8% of the companies managed to run their remote working activities with just a fraction of the employees ever since the start of the state of emergency. This confirms that several steps had already been taken to have a business continuity plan in place for crisis situations - implementation of technologies that can be used from anywhere, not just the office.

Communication, the important factor that defines a compassionate leadership

The employees who have rebuked the quality of the information provided by employers, highlight those skills that companies lack at the current time. The most frequently criticized was the lack of transparency of companies regarding:

There is progress in communicating with the direct manager, but this aspect still needs to be improved

Another aspect frequently rebuked in the participants' responses is the lack of empathy towards the employees who not only have to work in an environment that is different than the office, but also have to cope with new challenges due to isolation at home. There are even respondents who mentioned the need to hire a therapist to help them manage the personal crises emerging in this context.

There is increased communication with direct managers, including on topics related to personal life. However, there is a need for intervention by employers to increase the quality of these conversations so that the employees feel real support, and not just another management exercise.

Another aspect that created additional difficulties during this crisis was and still is job security. 60% of the respondents admitted that they had this concern, and 51.2% mentioned that they did not have the courage to discuss with the direct manager about the things that really concern them. This aspect signals the absence of expertise in the management of an organization to identify and manage the status of employees in the team, but also their positioning in the role of a passive participant in the communication process.

Another skill that is missing among employers is how to communicate the job restructuring measures. There are still many companies that leave this information to the human resources team, which maintains not only an ambiguity, but also a resentment towards the employer.

„When restructuring results in downsizing and the loss of employment, it has a direct impact on employees and can also have a negative impact on the surrounding community. However, restructuring should not always lead to technical unemployment or dismissals. A company may be able to adapt by other means (early retirement, re-deployment, or re-skilling of employees). The most important thing is to carefully consider how to proceed; first of all, we have to take care of our people, the most important factor of a company, and at the same time to have prepared a strong strategic plan to support an anti-fragile company, where things can evolve and progress so that we will be better prepared in the next crisis.”, mentioned Andreea Georgescu, Head of HR Advisory, Mazars Romania.

Only 51.2% of the respondents felt protected during the analyzed period

Regarding the protection measures implemented by employers since the beginning of the state of alert, the perception is rather favorable. However, over 20% of respondents mentioned that protection measures at work were not enough. Those who were more critical in this regard are those who:

In a crisis situation, not only the degree of maturity of the companies' way of operating is tested, but also their agility to make decisions and to implement measures in a short time that will protect both the company and its employees. Even if we test alternative communication channels, we optimize the transparency of the message, but also the ability of the management team to deal with sensitive situations - the human factor is now stronger than ever.

Mazars is an internationally integrated partnership, specializing in audit, accountancy, advisory, tax, and legal services. Operating in 91 countries and territories around the world, we draw on the expertise of 40,400 professionals – 24,400 in the Mazars integrated partnership and 16,000 via the Mazars North America Alliance – to assist clients of all sizes at every stage in their development.

[1] Where permitted under applicable country laws

How Telcos are redesigning their journey: connectivity challenges, digital education and the 5G delay in Europe

Mazars Study: Most of the global investors continue to seek deals despite COVID-19, but 90% of them predict falling revenues