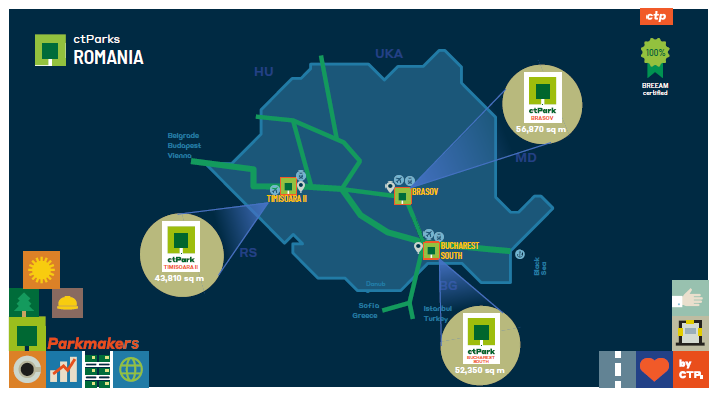 CTP, the largest developer and administrator of class A logistics and industrial spaces in Romania, with a portfolio of approximately 1,850,000 sqm, has just acquired another 153,000 sqm of industrial spaces expanding its portfolio in Brasov, and enlarging its presence in Timisoara and the South of Bucharest, thus becoming present in 13 cities. The transaction marks the beginning of a fruitful cooperation between CTP and the seller, Olympian Parks, in a swift and super quick M&A transaction, probably the largest of its kind in the local market this year.

Brasov, strategically situated in the middle of the country, is new on CTP Romania map, with 7 buildings, mostly rented, but also with available space for lease. Timisoara becomes now the second largest presence for CTP Romania, after Bucharest, by owning another industrial park with 5 buildings in the close vicinity of its CTPark Timisoara next to the airport in Ghiroda, also with space immediately available for lease.

"Our portfolio is closer now to the 2 million sq m milestone, while we are covering more of Romania through presence in Brasov. Timisoara add very nicely to what is to become shortly the largest CTPark in Romania outside Bucharest and its surroundings", said Ana Dumitrache, Country Manager, CTP Romania.

7 new tenants are entering the family of CTP clients as the rest of the inhabitants of acquired buildings are already having space leased in the group’s local portfolio.

The acquired parks are all offering possibilities of development on buildable land adjacent to the buildings – perfectly matching CTP strategy of full flexibility for accommodating tenants’ needs including the growth ones.

The transaction was structured and implemented by the CTP Romania transaction team led by Andreea Enescu, Head of Transactions, in record time, all made possible also by professional support from internal construction team led by Valentin Rosu on technical aspects and by excellent commercial and timely approach of CTP external legal partner, Theodor McCann.

During 2021, CTP has also purchased approximately 112,000 sqm of industrial spaces from Zacaria Industrial. Also, in 2020, the company carried out a series of similar transactions, including the acquisition of the A1 Business Park platform in Dragomirești Vale from Cromwell Property Group and that of the Equest Logistic Park industrial park, located on the A1 highway, near Bucharest, from Forum Serdika, being the most dynamic player on the industrial and logistics market.

Following this acquisition, CTP owns class A warehouses in 13 cities in Romania: Arad, Brasov, Bucharest, Cluj-Napoca, Craiova, Deva, Oradea Pitesti, Sibiu, Timisoara, Turda, Ineu and Salonta. In Central and Eastern Europe, the company is the largest developer of industrial and logistics parks with a portfolio of 6.6 million sqm which it aims to expand to 10 million sqm by 2023.

CTP is a top five industrial property developer and developer in Europe and the largest in CEE, with over 6.6 million m² of logistics space and operations in nine countries. The company is on target to expand its portfolio to 10 million m² by year-end 2023. With its entire portfolio BREEAM certified, CTP claims the position of the most sustainable developer in the region and is on track to reach carbon neutrality this year.

At the end of March 2021 CTP listed on the Euronext Amsterdam stock exchange, issuing 397,017,000 shares priced at €14 per share, which implied a market capitalisation for the company of €5.6 billion at listing.

CTP: total investment of over 150 million euros for CTPark Bucharest West by the first quarter of 2018

Dentons: Global business leaders voice major concerns over the use of Artificial Intelligence